Now we know how to represent records and we know how to operate on them using a nice F# like syntax. But how do we store our record in a data structure in the first place?

Code for this post is here. Thanks to Andy Sawyer and Steve Bower for reviewing this.

As it is often the case, C++ gives you many options that are not available in standard functional languages. A mixed blessing of some sort.

Well, storing them by value is the simplest option, but it has two shortcomings:

The second issue is not a problem in our scenario as records, by definition, are immutable and structurally equivalent (aka equality for them doesn’t mean pointer equality). The first issue is more tricky. Our records get a copy constructor by default which does a ‘memcpy’ of the object. That should be fast. But fast enough?

To answer this question (and more), I embarked in a little performance test that encompasses most ways to store a pod type in an vector like data structure. For all my test I used this struct:

By recompiling with different values for ‘bigBlock’ I can test what happens when the record size grows. In all tests a record is initialized with this function:

The tests are specific to the scenario I care about: performing functional-like operations on a Range:

The usage of a function and  a functor is a bit odd. I don’t recall why I did it that way, but it doesn’t matter as it is the same for each test. What the test does is just filtering a bunch of record, transforming them (map) to ints and sum these ints.

How many repetitions of each test are used, how big is the record, how many records the Range contains is specified in these constants:

Time is kept using this clock that wraps boost::chrono:

I have tested the following configurations. Adding records by value:

I then tested adding records using a pod_vector. This is a data structure described here and in “Imperfect C++”. It is a vector that uses as an auto_buffer as the underlying storage. An auto_buffer is a class that uses stack memory if it needs more than a certain number of bytes specified at compile time, otherwise it uses heap memory. It works well if you know at compile time that most allocations for something take at most N bytes, but some might need more. This situation is surprisingly frequent. Unfortunately, your objects need to be POD to use the pod_vector.

I then tested just allocating the memory, without freeing it and using boost::pool in it’s ‘local’ form, which means that memory is freed when it goes out of scope (stack-like). The main drawback of the latter is that you cannot return the container/range.

Finally, I used a Loki smart pointer. This is a very elegantly designed smart pointers from  “Modern C++ design”. You pass as template parameters the policies you want your smart pointer to have (aka how it should behave). I tested it like so:

The result of my tests are in this table and at this link. I used VS10 and gcc 4.6.2 on a Windows 7 box. The first number in the (S, N) pair at the top of each column represents  the size of the record, the second one represents the number of objects in the vector. To obtain reasonable numbers, the tests have been run with a different number of iteration for each pair, which means that you can compare the results vertically, but not horizontally. 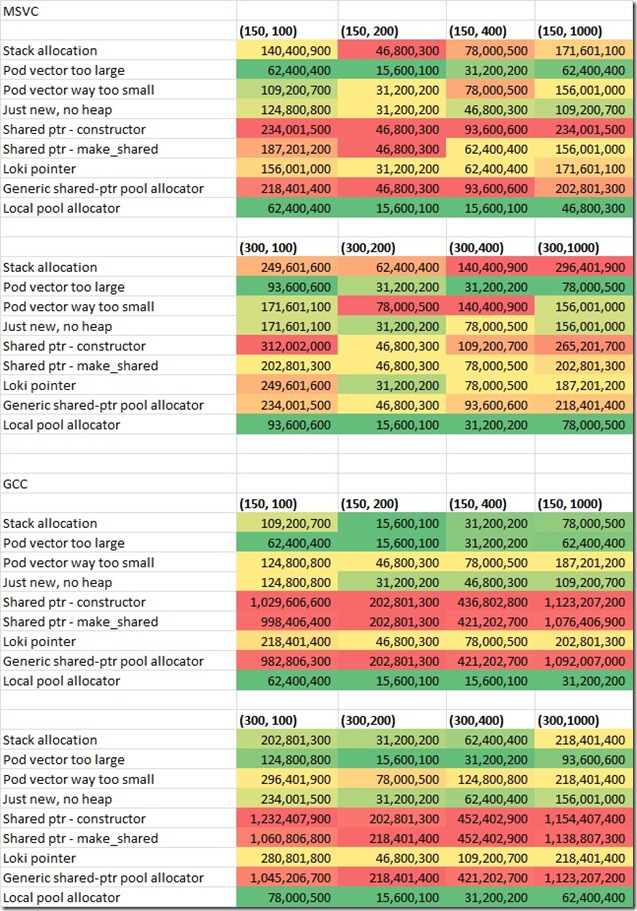 There are a lot of interesting things in this table. Here are my takeaways. They are obviously specific to this single scenario. You might have different scenarios or different takeaways:

So here you have it. A small detour on the performance of different schemes for allocating pod types. As it is often the case in C++, it depends …

BTW: Andy Sawyer told me about his rough algorithm to decide which STL container to use. I reproduce it here:

A decision tree for selecting a sequence container:

Or, to put it another way, “use std::deque  unless there’s a good reason not to”.  That’s probably an overly-strong statement, but it’s a reasonable starting point.

Naturally, every case will be different - and no set of ‘rules of thumb’ is going to work every time (this is one of the things which distinguish rules of thumb from laws of physics). Commonly, we don’t know ahead of time which of those criteria is going to have the most significant impact on what we’re doing; when I find myself in that situation, I’ll use std::deque; once I have a firmer idea of the criteria, I’ll go back and revisit that choice (which – quite often – is as simple as changing a typedef). And of course - as with all ‘optimisations’ - measure, measure and measure again!